I spent quite some time (which I have less and less of nowadays) trying to decide what to write my first post on because I have a lot of things I want to say. Even though I’m a few weeks behind I’m going to do it on Alessandra Ferri’s farewell performance because that had a huge impact on me.
I was lucky enough to be cast as a super in ABT’s full run of Romeo & Juliet at the Met this season. I got to be a bridesmaid in Act II, walking on half way through the village scene and basically standing as an extra in the background. THAT was an experience unto itself: first of all, there is no better view of that incredible company or that beautiful ballet than being right there in the action. But that theater - the wings, the house, the orchestra - when I first stepped out during our brief onstage rehearsal the Friday before I swear my heart stopped. I know it sounds cliché. I live for translating those kinds of moments into words, but it just cannot be done with this one - it was indescribable. Unreal. I’ve been on big stages before, but there is nothing like the Met. And in performance, even though I was only an extra, it was so amazing. There is something comforting and yet mysterious in knowing that nobody is looking at you, and yet EVERYONE can see you.
Anyway, Alessandra Ferri was obviously the highlight of the last performance. Her dancing itself, partnered by Roberto Bolle (side note: my boss at my recent internship was his publicist!), was, as always, impeccable. But what struck me more than her generous artistry and technique was the buzz backstage amongst the company. I was just a fly on the wall trying to stay out of the way of costume changes and tossed props, but being backstage that night was something special. During the balcony pas de deux the wings were more crowded than the subway at rush hour, but during every other evening’s performance there were just one or two stray dancers watching.
I was crushed half kneeling between the crowd in the second wing on stage right. At points, as the couple moved across the depth of the stage, we couldn’t see them dancing, just their shadows from the spotlight or simply the other dark faces and sprawled bodies in the wings opposite us. But it was the sense of support and camaraderie - the passion and the pleasure - that everyone backstage felt that night, from us mere supers to the principal dancers delivering bouquets of flowers at the final curtain calls.
As I watched from deep behind the crowd in the stage left wings as Ms. Ferri took her final bow (multiple times - I was amazed how repeatedly they made her go out there!) and I saw the entire company watching from behind and the flashes of cameras and flowers coming from the house, I remembered how much I wanted to be her. The prima ballerina with ABT.
I actually gave up hoping to dance with such a big company a long time ago when (persistently) I was reminded of my lack of turnout or arched feet. But watching her bid farewell I found something new in my hopes: Instead of seeking that unattainable perfection, I want to have that sense of appreciation, respect, pride, support, encouragement, community, and joy when I dance. I think that’s what I’m now in search of. 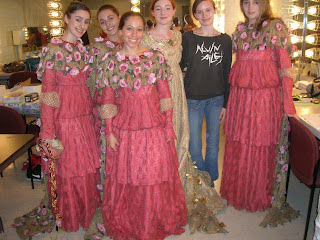 (me on far left) Bridesmaids in ABT's Romeo & Juliet @ the Met 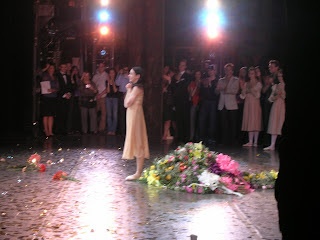 Alessandra Ferri's final curtain call at the Met with ABT company members in the background
Posted at 10:49 PM

I know this post is rather old, but I stumbled upon this blog by accident. Your pictures bring me back to last spring, which was both one of the most difficult, and one of the most triumphant times in my life so far. One of the defining memories I have of that time is lacing myself (with a bit of help) into one of those same bridesmaid costumes you're wearing. Being a super for that week of the ABT tour was incredible!