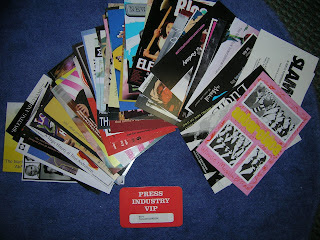 (my 1st press pass with the many brochures I received with it)
For the past week I have been assigned to review dance performances at the 11th Annual New York International Fringe Festival for this off-Broadway website called OffOffOnline.com. Not only do I get to attend any number of free shows at my will but I get to voice my opinion and get paid for it! This week has given me a glimpse into the arts critic’s life I aspire to have (I even received my first official “press pass”!) See my published reviews here, here, and here.
Being a ballet fanatic, the only performances I’ve been to since coming to the city have been strictly ballet. Of course I’ve been to Broadway shows and even a couple of modern performances, but after seeing the avante-garde kind of performances at the Fringe Festival it is clear how limited my, and perhaps that of much of the ballet world, exposure to the broad realm of dance theater really is.
The shows I’ve seen have been extremely out of the ordinary. One major difference between these and traditional dance performances is the use of multi-media and technology. Of the 3 productions I reviewed, all of them made extensive use of video and 2 used computer generated images. I think this epitomizes what’s coming in dance in the 21st century.
Sometimes, unfortunately, the special effects and loud visuals distract from the actual dancing. No matter how talented they are the dancers can get lost in the flashiness, especially if they are positioned against or beside a film screen in a way that forces the audience to decide to watch only one or the other.
In a world where audiences for dance, especially ballet and modern, are already dwindling it makes sense to attract newer, younger crowds to performances with different media. But since our society is constantly drowning in media it seems a shame to overshadow something as precious as dance.
These kinds of audiences are exactly what the Fringe Festival invites, with $15 tickets and downtown location and atmosphere. The venues (including 19 off- and off-off-Broadway theaters) are small, and the number of attendees even smaller. It was interesting, though, to get a glimpse of the community that appreciates these kinds of performances. After each of the shows I attended I was surprised to hear fellow viewers discussing the work in depth, as if they were close friends rather than complete strangers as they actually were. People were far more open to opinion than conversations I’ve overheard at other ballet performances. I suppose these pieces leave more to the imagination.
All in all my experiences with the Fringe Festival have been really amusing. I’ve really enjoyed my new exposure to various companies and types of dance (Japanese hiphop, anyone?) and what’s even better is that I’ve been given the opportunity to challenge myself and write about them in a critical format. Just another day in the life of an aspiring dance writer! 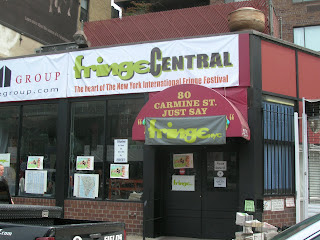 [If you’re located here in the city I strongly encourage you to attend one of these shows - any show! - as part of the NY Fringe Festival! You really haven’t seen anything ‘til you’ve been to the Fringe. It runs through August 26 at various theaters, with its home base at FringeCENTRAL, located in the Village on Carmine Street at Varick. See Fringe website for show times and descriptions. Also see NY Times coverage here]