This Day in History - Dancing With the Stars 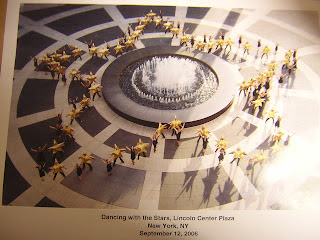 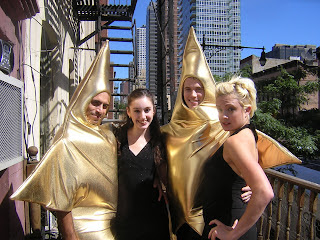 (our group of "stars")
Okay, so actually it was a year and two days ago that this happened, but you get the idea. This Day in History...September 12, 2006: I was in a city-wide promotion for ABC's tv show Dancing With the Stars. They were promoting the new season for the fall, so they had about 75 dancers (girls in black dresses, boys in gold "star" costumes...so attractive) go to various places throughout New York City and just dance while people gave out magnets to advertise the show.

We were in groups of 4 dancers (2 girls 2 boys) plus 2 others to give our ABC stuff. It was an all day affair: our group was first sent to some big subway station in Queens (sadly I don't even remember where it was...) in which we received many a strange look from commuters. Who's doing a tango in heels with a huge star at 8am? Yeah, that was us.

Later we got to dance on the balcony of this nice restaurant in east midtown. Again, many a strange look (and honks) from cars, busses, and people on the street. We had music blasting the whole time of course, and it was so much fun to just let loose and dance! So out of my realm (nooo ballet here...) but it was the most fun couple hundred bucks I ever made for a few hours of dancing! 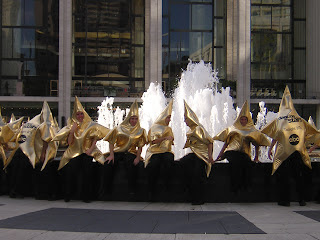 At the end of the day they gathered all the dancers and "stars" near the fountain in Lincoln Center (in our fabulous outfits we walked all the way from First Ave across town!) for a big group shot (see above). They also filmed a quick little number where we all formed a big star on the plaza (which was supposed to be used in a commercial, but I never actually saw it...)

Anyways, it was quite an amusing experience. I was just reminscing and thought I'd share the memory on here...another new season of Dancing With the Stars starts September 24. 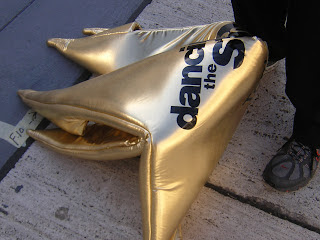 (a folded up star costume)