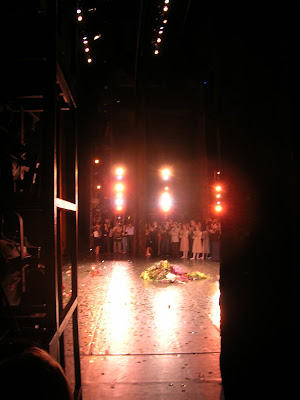 ABT opens their Met season this week. And what does that mean? They're hiring supers!

A super (supernumerary) is basically a walk-on role. Because many of their big ballets have huge scenes with lots of people, to fill up that gigantic, wonderful stage they often use "extras" to walk on or act as small parts like guards, maids, and so forth.

I supered for the company two seasons ago in their Romeo & Juliet (for Alessandra Ferri's farewell performance!) and it was absolutely amazing. I wrote about it here. Not only do you get some cash and a close-up view of those amazing dancers, but, my god, you get to be on that stage. It took my breath away the first time I walked onto it, the same way it did when I walked into an empty Radio City Music Hall last fall. 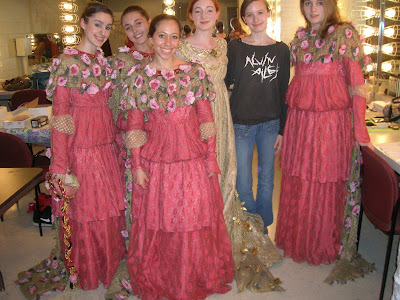 I'm excited that I get to do it again! This time in "Corsaire," which runs next week, May 26-30 at the Metropolitan Opera House.

Yesterday I went to the "audition," which basically consisted of standing in a line so they could see what roles you look like you might fit. Lucky for us, they need a lot of girls for this ballet. There's a big group of "slave girls," and then there are younger "servant girls" who come out with the Pasha in the ballet. I remember seeing it last year and thinking, "Oh how cute those little girls are. They must be like 8..." Of course, I saw it from like the last row of the very top-most balcony of that huge theater. But, my guess was not entirely off. The casting notice for "servant girls" asks for ages 13-18. I'm 20. They cast me as this. The other two girls with me are ages 11 and 12. Seriously! I cracked up. I know I look young but...

I didn't care, though. I wanted any part! Just to be on that stage again.

After they took us aside and cast the apparently older looking girls as slave girls, we started a brief rehearsal for Act I. Basically, as expected, we come on with the Pasha bowing and skittering across the stage, then we bring on a big pillow for him to sit on. Then we stand. Behind him. For all of act I. Haha. Hey, it's the best seat in the house to watch those variations night after night. Though I'd rather be doing them, haha.

The rehearsal was fun though. ABT Associate Artistic Director Victor Barbee practically performed the entire act for us as a one man show to explain how and when things would happen. Hah! He's great. I believe he is one cast of the Pasha, so I'll see him onstage too.

Anyway. We have two more rehearsals and a costume fitting later this week. Then next Tuesday is dress rehearsal before the first show. Pictures sure to come!
Posted at 2:44 PM

Email ThisBlogThis!Share to TwitterShare to FacebookShare to Pinterest
Labels: ABT "Le Corsaire" super

That is so awesome - I never really thought about how they cast those parts! Hey, there's hope for late learners like me ;). Have a blast on stage!!

Taylor, I had the same part as you last year supering for Corsaire! I was in the same boat as you too as I was 18 and with a number of JKO students who were 5 years younger than me! It was a ton of fun though and I wish I could do it again - maybe next year. Have a great time!!

Hah Sophie, I thought of you during the audition because I remembered you had done it last year and I was wondering if you were a slave or a servant. Haha. I'm excited for it.

Tonya, you'll maybe catch me passing by super fast onstage and then standing there for all of act I, haha.