It was 4 years ago this week that I first moved to New York City.

I am truly awed at how much has happened since my first days as a new New Yorker, a barely-past-sweet-16-year-old college student, a bunhead with a dream, a quiet kid with a phonebook entirely empty of New York numbers. I remember driving up to my dorm in midtown east on that sunny September morning, being greeted by a slew of "normal college kids" I knew I'd never relate to, and moving in all on my own. My first night here, I chose the "barre" over the "bar" - quite literally - and it's been that way ever since. While all the new freshmen went out to party in the city, I followed my carefully organized self-designed guidebooks to find the old Broadway Dance Center (before moving here I spent hours and hours online or at Barnes & Noble daydreaming and learning everything I possibly could about the city). I pulled out my map, roamed the grid of streets, and finally found the studio. That first class changed my life - in more ways than one.

Here I am, 4 years, 2 degrees, 5 apartments, and countless performances later, still in love with this fabulous city. It's shown me hope and despair, some real high's and even lower lows. But there is no other place on earth I'd rather be. I thought I'd repost a blog entry (or, actually a college essay) I wrote halfway through my time here (so 2 years ago) about my love/hate relationship with New York. I've been through this cycle at least once more since writing this, but thankfully I'm back to the wholehearted love side right now :)

I cannot express my deepest gratitude to my New York family and my real family for helping me continue to live my dream in the city of my dreams!

(I was a tad bit verbose here, and trying just a little too hard with my writing at the time...but I thought I'd leave this unedited, in its original form, for history's sake, haha)

I love you, New York. You are the source and breeding ground of all my dreams. You are the hope that got me threw some tough times; the opportunity that shined at an arms reach; the community for which I longed. Your bright lights waved at me with every visit and I knew some day I would be welcomed to call you home. Your tall buildings would look down on me, protecting me from the harms above. Your traffic lights would switch to green for go and I’d be on my way to someplace new every moment.

I love you, New York. Born in a small town of nothingness I always knew I’d have to look elsewhere to seek what I wanted: a life, happy and successful. We would visit you occasionally for a weekend in the summer, and honestly, it was love at first sight. I could see not much more past the striped walls of our hotel room and the scuffed leather of a cab, but I felt so alive as I had never felt before.

I suppose it was the movement. Even just glaring out from the 30th floor of the Marriot Marquis I could see the river of people below, the tops of heads like a school of fish trying to stick together yet still somehow apart. There was no sign of stopping. It was constant motion without a moment to catch a freeze frame with my CVS brand disposable camera. You couldn’t see their faces, but I knew they were all happy.

The lights from Broadway would tickle at our window. I’d watch the flashes repeatedly as I tried to fall asleep with my eyes open. I didn’t want to miss a thing. “10:15” the red numbers on the bedside clock would read, and I couldn’t believe my parents and I were already in bed attempting to block out the world in a calm sleep. I never slept a wink when we visited you. 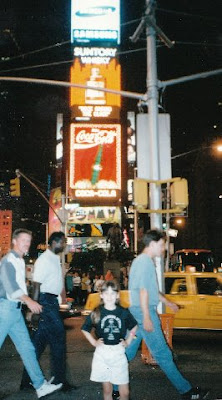 I love you, New York. Years later I moved to a boarding school in Philadelphia. In the spring we would hop on the Greyhound and come to your thrilling land for day. Oh, it was such an escape! I could not have loved the traffic preceding the Lincoln Tunnel more: it forced us to sit there, with a screaming baby in the seat in front and a homeless guy drinking from a paper bag in the seat behind, and stare at that jagged skyline that is Manhattan. I would play Billy Joel’s “New York State of Mind” on my uncharged iPod and had learned to time it just perfectly so the big finish would sing right as the Empire State Building came into view.

It was perfect. Port Authority Bus Station was the golden gateway to fun, fame, and freedom. My heart would throb as I rode the escalator bringing me up to 8th Avenue. The bums on the corner could be my best friends. The trash on the sidewalk could be diamonds. I was in New York, and life was all good. 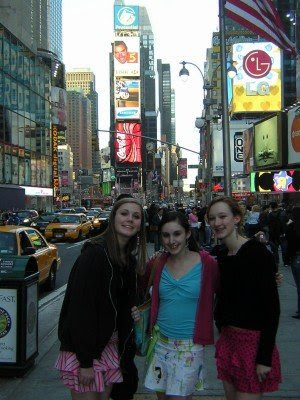 I love you, New York. I would visit Broadway and Lincoln Center with stars in my eyes. The music resonated inside me, flowing like the stream of people in Times Square. It never stopped. Curtain calls were just the beginning. I would never admit it, but every time the red or gold velvet closed for the last time of the evening and the orchestra packed up my eyes would turn to puddles, evaporating only when we hit the dark sun of 42nd Street.

The ballet was my favorite, even though I didn’t see one in the city until much later. The decadence of tutus and twirls singed my mind. I was so eager to perform, and even though I had yet to enter any of the theaters in Lincoln Center, I knew what that block at West 66th Street stood for: Passion. Pride. Perfection.

To my left was New York State Theater, to my right, Avery Fisher Hall. Straight ahead was The Metropolitan Opera House, its looming windows making it appear as a place of worship. I stood there by the fountain, with a penny in my hand (not much more than I had in my pocket at all) and closed my eyes. I did not make a wish. I had been making the same wish with every penny or shooting star my entire life and I knew this one had to be different. I promised myself that I would be here someday. That I would dance here someday. That I would be on one of these stages someday. It just had to happen.

I tossed my penny and watched it waver side to side before clunking to the bottom. There were hundreds of other pennies down there, some shiny and new, some grimy and barely copper anymore. But mine sat on top of them all in that sparkling water. The fountain was fresh, clean, and bubbling with energy, just like my New York.

I hate you, New York. You are the murderer and burial ground of all my dreams. You are the disillusionment that kept me pushing; the frustration that poked at my heart; the isolation for which I longed. Your bright lights blinded me with unfulfilled faith. Your tall buildings looked down on me, thousands of eyes threatening me through washed windows. Your traffic lights switched to yellow and suddenly everything was unclear.

I hate you, New York. I came here with dreams as direct and laid out as the grid plan of your streets. Uptown, around the corner, continue a few blocks and there you are, simple as that. I knew what I wanted and I knew you could give it to me. You held at your core the juice of my fervor. So shiny from the outside, but with one bite, so sour.

Oh sure, you gave me a glimpse at what could be. I’d roam your streets with not a care in the world. I’d go out for a walk and just simply discover: what makes you crunch, what makes you roll. What can I do here? Everything, and nothing. And I loved that. But you took it all away in a New York minute.

I hate you, New York.

I suppose it was the movement. You can’t hold on to a single moment here. Everything changes, even the good. You gave me a peek into the life I had always wanted and without telling me you moved it further away. That is the worst kind of sin: temptation. You teased me into thinking I could have it.

The lights from Broadway now ticker at my window. I watch the flashes repeatedly as I try to fall asleep with my eyes open. I’m not missing a thing, but I’m missing everything. “10:15” the red numbers on the bedside clock read, and I can’t believe I have so much irrelevant work to do that I’ll never get to savor a calm sleep until perhaps tomorrow evening, when I’ll run the risk of the same routine. The city that never sleeps, in it’s worst sense.

I hate you, New York. I visit Broadway and Lincoln Center with defeat in my eyes. The music resonates inside me, flowing like a funeral march at my own grave. It never stops. Curtain calls are now the ending. Every time I do get to be on a stage, any stage, I fear it is my last chance. You have stolen my hope.

I never admit it, but every time the red or gold velvet closes for the last time of the evening and the orchestra packs up my eyes turn to inward fountains, overflowing, fresh, clean, and bubbling with energy. Just like my New York.

I hate you, New York. With this fountain, I’m just another penny in your pocket. My face, like Lincoln’s, is squished between trash, lint, and sweat from work undone and unappreciated. I look up to you, drowning in your ripples.

Well, you have accomplished a tremendous amount in four years. Really, you have bolted from the gate like a racehorse. (Of course, this is coming from someone who spent too many years at the wrong sort of bar.)

Nice post, in any case. Most people would layer some protective sarcasm/cynicism on an essay like that, and I think it’s cool that you didn’t.