Sylphs Wings and Tutus and Programs, Oh My!

This weekend is our latest student showcase at the Ailey Extension Program! It's Sunday 3/29 at 4:30pm and 7pm at the Ailey Citigroup Theater.

I'm dancing in excerpts from Les Sylphides and Napoli, but the program has lots of other fun stuff. We have guest stars Les Ballets Grandivas and works from Vic DiMonda, Ashley Carter, Tracie Stanfield, Ginger Cox, Funmilayo, Bev Brown, Sue Samuels, and more! And it's our first time putting it all together in a theater - yay! 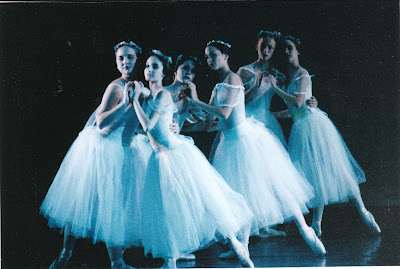 (me in Les Sylphides corps when I was 12)

I'm officially billed as assistant to the director, which is exciting. I've been pretty involved in helping here and there with these things since our first one last February 2008 (with only 20 people in the studio audience!). It's exciting to see how it has grown since then (the past two we've done have sold out weeks in advance, and we upped it to two performances each time) and I'm honored to be such a close part of it, both as a dancer and a...helper. All week I've been working not only on cleaning up my sylph arms and feet and going over counts for Napoli's partnering, but I've finished making 30 pairs of wings, found the best safety pins for the cast, steamed my romantic tutu and the extra one, ordered last minute men's shirts, written some PR blurbs for Facebook etc, and - the most time consuming - coordinated the program order (and name spelling) of 150+ dancers. Phew! 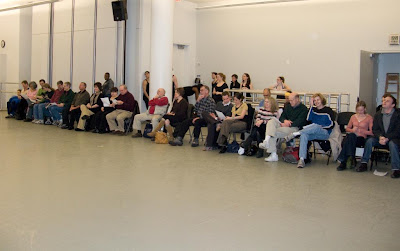 (the lonely audience of our first show in Feb. 08. my family makes up about half that center section, haha. this weekend it looks like we'll have literally almost 25 times that amount!)

But I love doing this kind of thing.

I grew up with my family running their own dance studio with annual recitals every spring. My mom and my grandmother did EVERYTHING by themselves for that, from what I've mentioned above to securing theater space, hiring janitors, hanging the backdrop, taping off reserved seats, cueing the music, and more. Because of many things I was unable to help out there the past two years, and I suppose the first three years of my life didn't count - so for about 15 years I was kind of the assistant in training to the directors, haha. After watching my family as role models for wearing many hats and doing so myself for so long, it really comes natural to me now to step in and try to take care of as much as I can with the performance. I'm really happy when I can contribute beyond what I give onstage (and boy am I happy to be back onstage again!).

I'm lucky to be in a position where I CAN be so involved with a New York performance like this. In any other circumstance I would hardly have such an opportunity, and it's a great test of my multi-tasking skills, dancing and organizing simultaneously (which - I may have mentioned before - I'm always at my best when I'm absurdly busy). As always, I'm VERY grateful. 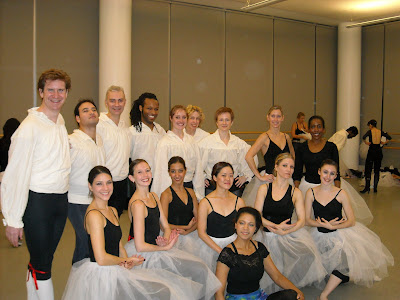 Besides the behind the scenes work, of course I'm thrilled to be performing. In the earlier show I'm in Napoli Pas de Six, which is one of my favorite favorite things to dance. We did an extended version of it at BAE a few years ago, but I only understudied this section (actually, I DID a lot of the rehearsals because a girl was injured, and then she got to do the real shows...). It's fun to be back on the same stage where I was a corps dancer now doing a bigger part. 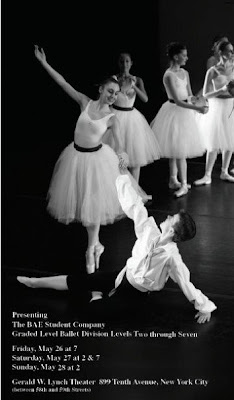 That's only for the 4:30pm show, because there were too many people to have a single cast. But in both shows I'm doing a sort-of-principal part in an excerpt of Les Sylphides. By that I mean, we really don't have a hierarchy in the way we work this program because it's an open class with mostly adult students (which is FANTASTIC), so I am by NO means the "lead." But I come in and out here and there doing some fun things around the corps.

More updates and pictures to come after Sunday. I plan to be live-tweeting all day so check in on Twitter, too :)
Posted at 1:23 AM