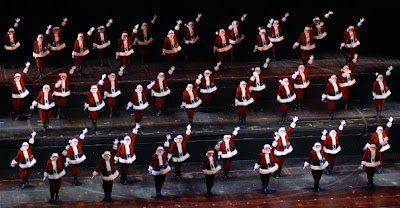 You know life is amusing when you get to put on a fat Santa suit on a warm fall morning in a random warehouse!
This morning and yesterday I had my costume fittings for Radio City - and what fun it was. I've missed the show SO much since last year, and being in the costumes again only made me more anxious to get going again. (Read about last year's fitting here.)
Yesterday I had to go fill out paperwork at the theater, and while I was there I had to try on all my headpieces. That started of course with my ballerina bear head! In the show this is the least fun part - trying to dance on pointe in a heavy hot fur costume, all the while being nearly blind thanks to the bear head. I got used to it as the season went on, but putting it back on yesterday brought back memories of when I first had to wear it in rehearsal onstage. It's a little dark and scary in there, haha. We can only see clearly through the space between it's lips - a very narrow slit. The nose of it is dark mesh that we can see out of only slightly, and that's if the stage lights are hitting it the right way. It's going to take some getting used to again...
After that I tried on three other hats I wear throughout the show, but they were different from the ones I wore last year. Though every cast member has their own set of costumes, my alternate from last year (the girl who did my spot in the other cast) and I are now in the same cast, so we knew one of us would be getting a new wardrobe this season - and that's me! I was excited to see which costumes I'd be wearing, and I got to find out this morning... 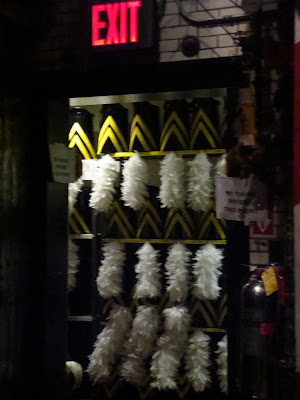 I headed out to Radio City's costume warehouse in Queens, a very unassuming building in a pretty empty neighborhood a few subway stops out. They gave us really clear directions, but I think last year I got a little lost, haha. Luckily everything is more familiar this year! I got there early and took a little stroll around the neighborhood because it was such a nice morning. It's so funny to think that all the magical, beautiful, expensive costumes seen onstage are kept in such a dreary place.
Soon it was time for the fitting. I went in and up the elevator (which was the size of a small dance studio! I suppose it has to be to fit all the costume racks) and was greeted by one of the wardrobe folks. She led me through multiple rooms, lined with mile-high stacks of colorful threads, sewing machines galore, racks and racks and racks of old costumes, many mannequins, and all kinds of loose trimmings. Where the wardrobe room at the theater yesterday was packed with Rockette reindeer antlers and pretty headpieces, this room had endless lines of toy soldier uniforms, sparkly crystal dresses, and...a rack of all to familiar pieces labeled "Gordon" for me! 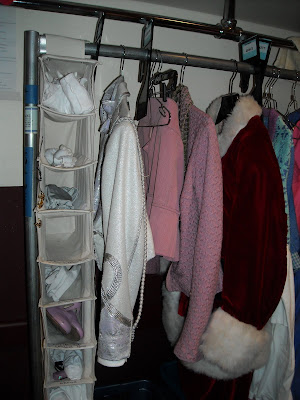 I've always been fascinated with costume shops. Back when I grew up in Boston Ballet's Nutcracker, a huge highlight was going in for fittings in the basement of the studio and seeing all the gorgeous tutus and tiaras. Ironically, one of their costumes I loved seeing up close was the bear costume they use in the party scene of Nutcracker. It was all brown tulle ruffles, chunky and itching looking at first glance. But onstage it really looked like a cute furry bear doing cartwheels and tempting the party kids (which was later me). It's amazing to see the differences in how things look up close and from far away onstage!
Anyway I found comfort in the familiar pieces on my costume rack this morning - my own ballerina bear suit, the red velvety Santa outfit, my silver "Shine" skirt and jacket. And then there were the new costumes I was expecting - well, not new, but new to me. They were my friend's last year, who is now out on the European tour of "West Side Story" (how jealous am I?!) and they're cute! The whole show is full of wonderful costumes, though.
First I tried on my new wintery dress for the scene where we dance in Central Park. Last year I had a finicky skirt that kept coming undone when my partner lifted me, but this time I get a simpler burgundy-ish dress with a cute jacket over it. I had to stand there forever with this one as the costume people (more familiar faces :) pinned and tucked and rolled extra material away because I'm so short, haha. 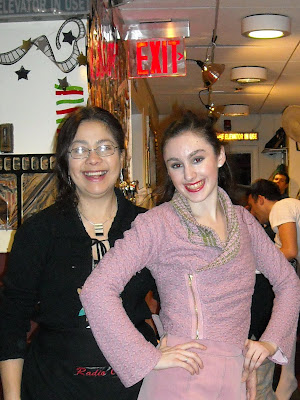 (my Central Park costume last year, with one of our fabulous wardrobe ladies!)
They are incredible with the amount of knowledge and detailed-thinking they have to work with. There were three or four of them at any given moment twisting the costume, discussing where and how to take pieces in efficiently and effectively. I'm amazed at what they can do, and even more in awe at how much work they have cut out for them just with my costumes alone! They really "fit you to a T" and make each costume absolutely perfect for your body, from sleeve length to evening out an ever so slightly tilted vest to the smallest imperfection in a line of stitching. It is so professional and it really is the royal treatment. I stood there, reminded of how incredibly fortunate I am to be involved in such a fantastic environment!
After my "Central Park" outfit I moved on to my "Magic" dress, which we wear in the toy shop scene of the show before the Rockettes dance the rag doll number. Here they messed around with the puffy sleeves a bit to avoid giving me "football arms," haha. This scene is super vibrant and colorful. Last year my dress was mostly a lime green, and this time I'm more yellow and purple. Fun! 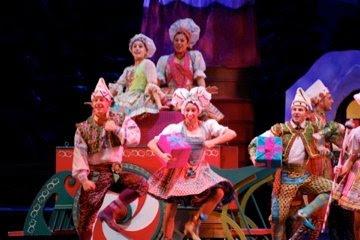 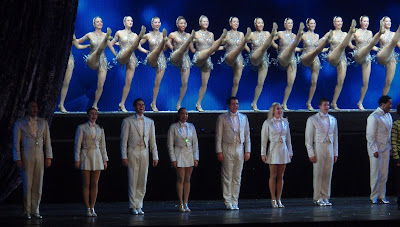 Next came my "Shine" costume, the one we do the least dancing in at the finale. Apparently they kept my same exact skirt and jacket from last year, but somehow it felt a little foreign on me. It's been a while, I guess. They made lots of pinning and adjustments - it's like the costume grew and became really uneven over the summer break, haha. But after that things got easier for them - my Santa suit was the same one from last year, and there's not much you can do with that thing to make it any more flattering, haha. It's cozy though. My "Nativity" shepherd robe also didn't need much editing. And the last to go was the lovely ballerina bear suit. I forgot how funny looking it is without the head on, haha. 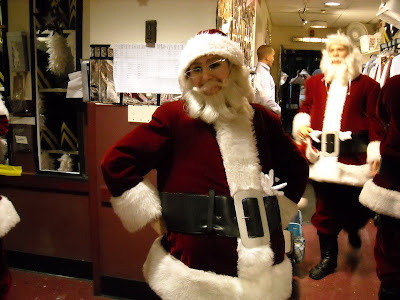 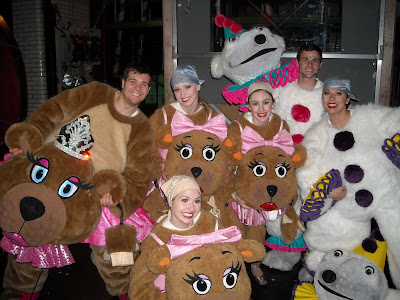 Putting everything on made me really want to just get up and dance! I'm sure my body will remember most of the choreography when we start rehearsals next week (hey, I did the show 110 times last year!) but I'm likely going to be in a different track this time, meaning different places within the same dances. I'm SO ready to get going, get learning, get dancing, and get performing!
Posted at 11:30 AM

This is so exciting, Taylor! You are, by far, the coolest bear I know :)

I can't wait to see you in the show! It's definitely an experience of a lifetime so enjoy every minute of it.

Taylor! I can't wait to see the show. Not only do you make it sound so exciting, but I had no idea you danced so many roles and thank you for mentioning them in your post along with the wonderful pictures of the simply delightful costumes - it is going to be the experience of a lifetime and I hope you enjoy your new costumes and positions...

Hey Taylor! Its Jillian from class/rehearsals at Ailey. Kat posted this on the Facebook page and I think its awesome! I had no idea this is the show you were doing! Ironically enough, Friday night I met 7 of the Rockettes at a local bar here in Astoria. They seemed pretty nice. I heard the stage is steel though, and really tough on the body, whats that about?! Good luck, now I definitely have to get tickets to see this years show, so I can come see you dance!